A blog on public faith 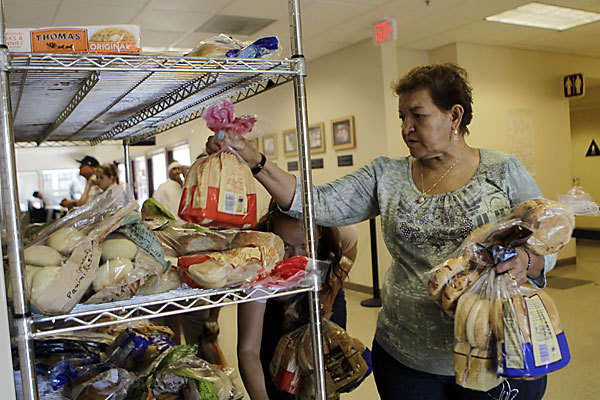 Are the poor in the U.S. lazy? Many people in the U.S. believe they are. The truth is that the huge majority of those living under the poverty level are working: a quarter of all wages fall below the poverty level, and half of all U.S. wages earners make under 35K a year.[1]

In a previous post I wrote about the dying understanding of the role of government in a civil society, and why this sentiment has grown. This is part two, illustrating the reality of the working poor, and why outside issues—rather than just individual initiative—matter.

It is increasingly clear that the American Dream is elusive for many. Largely, this is a structural problem. Linda Tirado wrote a book about her experience living on minimum wage and supporting her family in Hand to Mouth: Living in Bootstrap America. Here is a summary of her experience that paints a clear picture of life for the majority in the U.S.

Linda gets up at 6am to go to her school, and then puts in a full day of work. After work, she picks up her kids then her husband, because they share a car.[2] Upon arriving home, Linda has a half hour to change and get to her second (minimum wage paying) job. She arrives home at 12:30 am after a one-hour commute, then finishes her homework and other work and ends up in bed around 3am. Two nights a week she does not have this schedule; during those days she spends time with her family and catches up on housework. Linda says that rest is a luxury she cannot afford, and with no end in sight in the near future she continues to press forward without anticipation of a break or vacation.

Housing has been a struggle and she and her husband, an Iraq war vet, have on occasion had to stay in hotels.[3] When she was pregnant with her first child she lived in a hotel, eating peanut butter and microwaveable frozen burritos while on WIC.[4] Since Linda could not afford prenatal care, she chose her meals carefully to account for protein and iron in her diet. Opening a bank account or having a credit card are unattainable for those in poverty; for Linda this has meant there have been times she could not even get a hotel room even with cash in her pocket, because most hotels require a credit card.

Access to financial services is a major component of Linda’s poverty trap. Saving money is difficult, even with a bank, because of the large fees charged by banks for not maintaining minimum balances.[5] Most often families such as Linda’s have no other choice but to utilize predatory payday lenders that charge extremely high interest rates on check cashing services or loans.

Linda has been turned down for secretarial or food server positions because of missing teeth and bad skin, being told that she does not fit the image of the company. She attributes her bad skin to living on the caffeine and nicotine she uses to stay awake.[6] Dental work, one of the most expensive of medical costs, is out of reach. Linda experiences near-constant pain and low-grade fever from infections caused by untreated dental problems.[7]

Her health is further complicated because she has no benefits in her minimum wage job, where she puts in long shifts and is constantly commuting. As an hourly employee, taking time off work to apply for benefits or to commute to a free clinic can cause her to miss out on vital wages.[8]

As is the case for many poor people, Linda’s health issues are exacerbated by poor nutrition. In America today, there are vast (generally urban) “food deserts,” where it is impossible to find fresh, healthy food.[9] This means that pre-packaged processed foods or fast food are often the only viable food option. For many in poverty this creates a dichotomy that is hard to understand for those who are not in dire straits: they are obese, but they are also malnutritioned and constantly hungry. Linda knows her poor diet contributes to her difficulties, but also knows that worrying about it won’t help; besides, she says, “I’ve got way bigger problems than a spinach salad can solve.”

Her bosses, and even strangers, often subject Linda to dehumanizing moral judgments; these assaults on her personal worth create a craving for dignity that can lead to bad decision-making. Additionally, she is badgered by the false American platitude that anyone who works hard enough can prosper–it is easy to internalize the belief that if you are not prospering, then you are the one to blame. Depression goes hand in hand with the complicated misery of poverty, but healthcare, medication, and counseling to deal with emotional pain is out of reach. As a friend in a similar situation has said, “Depression is a luxury disease.”

What is the solution for Linda? Should the church or a charity pay literally thousands of dollars for her dental work, health care, and a down payment on an apartment and working car? Or should it hold the government accountable for providing a living wage, developing infrastructure, and lowering health care costs?

The main question stories like Linda’s present is this: Is it the individual who is on welfare, or is it the corporations? The fact is that most people who receive “food stamps” (SNAP) are working.[10] In our capitalist system, companies are entitled to make a good profit. If, however, the company is making that profit while not paying a wage that supports a life, this is costly. It costs individuals, like Linda, who pay for those profits with mental, emotional, physical, and ultimately spiritual poverty. And it costs us as a society–partly because our taxes are used for government programs that enable that low wage, but also because we all lose out when a whole segment of our nation cannot reach their potential. In the end, we need to think about who is really receiving government assistance–is it Linda we are subsidizing, or is it the corporations she works for?

[2] Most often low-income families have no car because the down payment is insurmountably high. Gas is also too expensive as a regular expense.   Low-income car buyers pay 2% more for a car loan than rich car buyers do. Low-income drivers will pay $400 more annually to insure their cars than wealthier drivers will. When Linda’s car needs repairs she cannot afford, she will walk several hours each day to get back and forth from work.

Most low-income individuals use public transportation to get to work. A study at Harvard found that commuting time is the single strongest factor in one’s ability to escape poverty. The longer an average commute, the lower the ability of impoverished families to move out of poverty. http://bucks.blogs.nytimes.com/2012/01/30/lower-income-families-may-pay-more-for-auto-insurance/

In California, a family has to work a combined 92 hours at a minimum wage job in order to afford rent for a two bedroom apartment. (See the referenced study for state-by-state breakdowns.)

[4] The federal poverty line for a household of two parents with two children is $23,283. Basic needs cost at least twice that in 615 of America’s cities and regions.

Public food assistance such as WIC and SNAP help, but are not enough to prevent poor families from regularly experiencing hunger. Most often, this food assistance is all that is available, as cash assistance is rare to non-existent. Harmful social myths such as that of the “welfare mother,” means many voters falsely believe that much of their tax dollars are going to support the non-working poor. http://aspe.hhs.gov/poverty/13poverty.cfm

[6] It has been found through such initiatives as drug testing requirements for those applying for food stamps (SNAP) that the poor do not abuse drugs more than the non-poor. There is little difference between the rich and the poor when it comes to experimentation with addictive substances or behaviors, but there is a world of difference in their ability to be free of the trap of addiction. Poor individuals cannot afford legal help related to problems associated with substance abuse, they cannot afford treatment facilities, and often windows of opportunities are lost during the several-month wait for free treatment.   Linda uses nicotine in order to reduce hunger, relieve stress, and most often to stay awake due to crippling fatigue from mothering, going to school, and working two minimum-wage jobs.

[7] Anecdotally, to illustrate the cost of dental work, I had seven thousand dollars in dental costs last year, which bought me one new tooth and one root canal.

The exorbitant cost of health care in America by far surpasses any other country; yet we also deliver substandard care—far lower than any other developed nation.[8] Any regulation of this problem is constantly either watered down or stopped due to the extreme partisanship fighting in Congress, or fear mongering around anything that could be termed “social” rather than individual. The problem of healthcare in America costs billions to both the government and to individuals.

Substandard care is especially devastating for low-income or minority families. The infant mortality rate for children born into African-American families is lower than that of children born to families in Bangladesh.

Because good healthcare and affordable insurance is out of reach for many families, most middle to low-income families in the U.S. are one catastrophic illness away from permanent poverty.

One thought on ““Poor People are Lazy!””